The Cotton Wolf Company is the culmination of decades of diverse and deep experiences. The company was founded by Andrea, for whom writing is a pathway to what's around her, storytelling the preservation of the eternal pieces of us all. Writing has taught her that very simply put, life is the story. Talk about it. Share it. Write it down so we don't forget it. 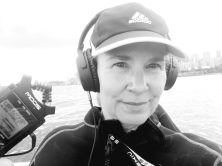 From managing editor of a large, converged newsroom to leading a media company's innovation team driving strategic change initiatives, Andrea has seen journalism from most of its angles.

Andrea’s career has spanned print journalism’s struggle out of its stalwart 20th century position into a new place within the essential Fourth Estate of America's 21st century resistance-charged political landscape.

Her applied journalism endeavors are focused on shining the light on social injustices, considering at length how environmental injustices cannot be relegated to a separate conversation in the midst of the escalating climate crisis.

A journalist at heart, Andrea has held executive level positions in both the journalism and business divisions of several media companies, uniquely positioning her to help lead change in the industry. She has served in the senior communication role of a major nonprofit, held public advocacy roles within which the building of public-private relationships was paramount, and has been privileged to instruct at the university level. She has worked in front of the camera, served on industry association boards, and directed media company advertising divisions.

Andrea is especially proud of the team awards of which she has been fortunate to be a part, from multiple Eppy and Digital Edge awards, to the News Media Alliance's (formerly the Newspaper Association of America) Best Online Newspaper award, presented to The Kansas City Star when Andrea served as The Star's Online [Digital] Manager.

Andrea earned her bachelor's degree from Truman State University, and her Master of Fine Arts degree from the California Institute of Integral Studies.

Andrea has always been captivated by the role communication plays in every environment. It dwells at our human core after all - the desire to share and transfer ideas.