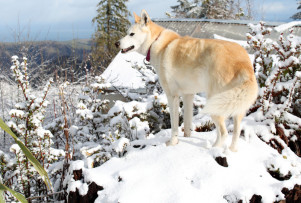 Inspiration comes in various forms and along different paths.

For the Cotton Wolf imprint it came in the form of a little wolf (Alaskan Husky); a working sled dog who, along with her team and a very special musher, finished the Iditarod when she was five years old. That accomplishment alone was extraordinary, but in the way she cherished her running mate this story came to be.

The morning after her sled mate left this world, Cotton Wolf sat in the grass in front of the den where she had fiercely protected him, and cried as if her heart would break. Loud, painful howls filled the morning fog that was hanging over the mountain.

Those agonizing sounds arose from an animal who was typically the quietest and stealthiest of creatures. When she was not in her harness working, she rarely barked or howled. She demonstrated affection and intent usually through touch and motion; she rarely used her voice to communicate. On that somber morning she could only convey her pain through soulful howls and excruciating cries that echoed her hurt throughout the damp, dim forest.

After she had cried herself back to silence, Cotton Wolf walked into the house and lay down on some manuscript pages, blown off the desk in the breeze from the open window. She wouldn’t move. She wouldn’t eat. She wouldn’t get up even for a drink of water. She was sending a clear message. She insisted her running mate's story be finished. And not just his story. She had an innate understanding about the interconnectedness of all living things, each life a worthy story to be told. Her ask was simple ... help tell the stories, because our stories are everlasting.

Receive or give a free copy of Gerry's Sky.

If you, or someone you know is hurting from the loss of a dog companion, send us a note and we'll ship a FREE gift edition of Gerry's Sky right away.