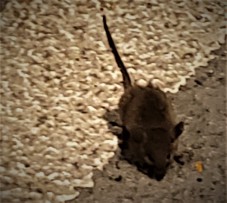 Pup after consuming poison from a bait box. Photo/Andrea Lynn

Lids collapsed over dark round eyes and the tiny body winced and writhed as if in the throes of a nightmare. An abdomen heaved, went still, and then heaved again. Diminutive gasps came from lungs fighting to find oxygen. Limbs could no longer handle the weight of the tiny body as it sank and sagged, overcome by the toxicity coursing through contaminated blood vessels.

This mammal baby was intentionally poisoned.

With a final burst of effort he/she/they scurried on an uneven trajectory in search of, what? A mother? Ways to escape the pain?

The International Association for the Study of Pain (IASP) has a clear definition for pain and, alongside several studies, defines what pain is and how it can be assessed in non-humans.

The pup found death beneath a sunflower and a four o'clock plant in the community garden, having taken some of the poison from the black box inside the adjacent residential building’s parking garage.

We are more like rats and they are more like us than most humans would probably care to admit. Rats even dance like us. A recent study that transplanted brain organoids grown from human stem cells into rats in order to study human neuropsychiatric and neurodegenerative disorders illuminates our similarities.

I’m comfortable with rats; I admire and appreciate them. We are closely related. It still turns my stomach to recall them suffering on the slicks of extremely sticky adhesive deployed in my childhood home. Captured animals would sometimes manage to gnaw off limbs in their efforts to escape, but most of the time they struggled on the sticky pads until they died.

I found my appreciation for rats thanks to Cotton Wolf, a former Iditarod sled dog who came to live with my partner and me.

The Norway rats in our backyard learned to follow Tumble through her pet door at night, enamored of the cookies they came to know thanks to Tumble’s habit of carrying her cookies outside. She would lie down in a shady spot beneath the entwined bald cypress and strangler fig and relish her treats, creating plenty of crumbs during her enthusiastic munching.

The rats learned to trail Tumble into the house through the pet door under the cover of night. After she fell asleep on her raised bed, situated near the door, they hopped up beside her, grabbed a cookie or two that she had hidden in her bedding, and proceeded to the darkest corner of the linen closet 10 meters away. There they nibbled. Once the cookies were finished, they scrambled across the living room floor and out the pet door, leaving the same way they had learned to enter. My partner and I were amazed at their skills, and watched the rats maneuver through their cookie adventures on several occasions.

When they became too comfortable and decided they needed to check other beds in the house for treats—including the human beds—we invested in an electronic pet door that opened and closed by a collar Tumble wore. Hypocrisy, I know. I'm tangled up in my own concepts of being human. Cultural ecologist and philosopher David Abram writes about associative empathy wherein the body comes to recognize other centers of experience and understand other bodies beyond self. I clearly need more of this.

Scientists have warned for decades that as we destroy habitat, we force animals closer to us. Our situation with the rats was maybe a little unique; they took risks that made them visible to us. But to assume rats aren’t vital components of a habitat because they keep to the shadows is to misunderstand an ecosystem, and the web of life.

The Word HUMAN dwells in the word HUMANE.

Humane—"Characterized by sympathy with and consideration for others; feeling or showing compassion towards humans or animals; benevolent, kind."  –Oxford English Dictionary